Art – Alive and Well in Wisconsin

When I moved to the Midwest 15 years ago, my family was surprised. How could one move from the East Coast to the Midwest? It seemed incomprehensible to them. When I informed them I was moving to the North Woods, to a small town in the “middle of no where”, they were alarmed. What about culture? What about music? What about opportunities for the children? My answer was always the same. “It’s not that far from the cities.I have a car.” In reality, we didn’t really need to go to the cities, we just had to be more pro-active, plan well in advance. We had to change our expectations, more local artists, more amateurs, less professionals. The truth is…. that was reality then but it isn’t reality any longer.

I have spent the last year traveling around Wisconsin visiting small town performing art centers and other musical venues. Let me tell you, small town Wisconsin is not only alive and well it is thriving. Yes I have seen my share of local musicians and various “amateurs” but I have also seen Bill Staines, Brandi Carlisle, John Prine, Mike Compton, Yonder Mountain Band, Corky Siegel, or best of all the ABBA Tribute band. Yes I have gone to the big city in years past and seen the likes of Carol King and James Taylor, Eric Clapton, Billy Joel, Elton John. They were great concerts but I will take a small performing arts center any day to the likes of the Xcel Center or the Target Center where you watch the big screen more than the stage. It is true that you don’t have multiple options on the same evening like you would have in Madison or Milwaukee. It’s true that in many towns the venues operate only once or twice a month. Seeing a performance every weekend might mean traveling at least to the next town. But, that is a small cost for living on 20 acres two miles from the center of town and being kept awake at night because of the deafening sound of peepers. 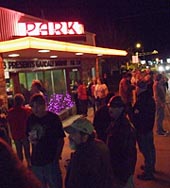 So on the average day, I would have to say that although we are close in small town Wisconsin, we still are not quite on par with “the big city.” That all changed this month. You see, on October 1st, small town Wisconsin was at least on par if not ahead of many big cities. On October 1st, Hayward Wisconsin was host to the Manhattan Short Film Festival. That put us on par with Milwaukee and Minneapolis and put us ahead of Madison and Chicago. The Manhattan Short Film Festival was shown in over 200 cities, across six continents for one week. It is a film festival of short films, nothing lasting more than about 18 minutes. From all of the submitted films, from all over the world, the top 10 go out around the world to be viewed and judged by the world at large. I was there at The Park Theater on October 1st with 179 friends, laughing and crying and reading sub-titles. Our votes counted just as much as those in New York,  San Francisco, and London. Hayward is now on the map for something other than sporting events and the National Fishing Hall of Fame. Culturally, we are coming into our own, as I found all over Wisconsin last year.

This year I’m continuing my pursuit of eventually attending every Performing Arts Center in small town Wisconsin. This year I’m targeting theatrical performances. I suppose that’s because I saw Of Mice and Men in Green Spring at the American Players Theater and was enthralled. If you have particular PACs (Performing Art Centers) that you think I ought to visit, drop me a line. Otherwise, I’ll just plan to see you out on the trail.

This entry was posted on Thursday, October 20th, 2011 at 4:19 pm and is filed under culture, film and video, performing arts, travel, uncategorized. You can follow any responses to this entry through the RSS 2.0 feed. You can leave a response, or trackback from your own site.

3 Responses to Art – Alive and Well in Wisconsin