Let’s Go to the Film Festival?

An article earlier this month in the New York Times about the Sundance Film Festival, held annually in January, and about film festivals in general asked: Are they still necessary?

I think it’s a valid question, though I certainly hope the answer is yes. Or that they are at least still considered a pleasant and worthwhile way to spend a weekend. I am coordinating four film festivals this March and April here in Wisconsin.

The festivals are called Making it Home, and they each will use a variety of films, from Wisconsin and around the world, to explore the many ways people and place affect one another. The first festival opens during Aldo Leopold days and the fourth and final festival takes place during the 40th anniversary of Earth Day. The environmental themes of the Making it Home Film Festivals make it especially important to ask out loud: Should we all save the carbon output by staying home and ordering up movies on Netflix?

The Wisconsin Humanities Council strives to support strong communities with public programs that encourage the use of history, culture, and conversation. We understand that films are powerfully good at telling stories and giving people something to talk about. We also figured that communities around the state would enjoy seeing free films and that, considering the strong tradition of caring deeply about the Wisconsin landscape and its natural resources, Wisconsinites would be eager to see some of the latest, most exciting new films from filmmakers around the world.

Robert Redford, founder of the Sundance Institute, which includes the annual festival and the Sundance Channel on cable, chooses to embrace technologies that allow people greater access to non-hollywood films. “Opening new vistas,” he is quoted as saying to describe his approach to the broad distribution of Sundance selections. He believes that the more access people have, the greater their overall appetite for independent film. The Making it Home Film Festivals draw from the Tales from Planet Earth Film Festival produced by the UW-Madison Nelson Institute in Madison. 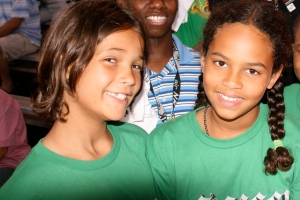 The film "What's On Your Plate?" will screen at Making it Home Film Festivals, followed by family-friendly conversations about food! Film info at http://www.MakingWisconsinHome.org.

Ultimately, the goal and the appeal of film festivals like Making it Home and Sundance is to bring folks together to spend some time sitting still, in a darkened theater, to share the experience of a well-told story. Because when people gather, and feel moved or inspired, they are inclined to turn to one-another, friends and strangers, to talk.

The Making it Home Film Festivals, organized by the Wisconsin Humanities Council with local partners in Baraboo, Dodgeville, Milwaukee, and the Chequamegon Bay (Ashland/Bayfield), have been designed by and for those communities. Films were selected and events planned specifically to meet the interests of the people living in those regions, making the drive downtown to the main street theater worth the time (and energy). And while you can go to the Making it Home Website and watch trailers for some of the films, as well as short films made by Wisconsin filmmakers that will be interspersed throughout the festivals, I would agree with the Sundance fans: Attending a film festival is a life experience for which there is no substitute.

This entry was posted on Tuesday, February 16th, 2010 at 7:59 pm and is filed under culture, environment, film and video, history, humanities. You can follow any responses to this entry through the RSS 2.0 feed. You can leave a response, or trackback from your own site.