Under the Big Top

Under the Big Top…..to a large percentage of us that conjures up images of circus tents and performers, animal trainers and acrobats. Even if we are too young to have experienced the circus under a tent, we all have read enough stories, seen enough movies to associate the two – Big Top equals circus. There is one place however where Big Top conjures up a different picture all together and that place is the Northwoods of Wisconsin, where Big Top equals Chautauqua, Lake Superior’s Big Top Chautauqua to be exact.  A place so magical that you cannot help but be drawn back show after show, season after season.  This is the granddaddy of all tent shows.

Tent shows, or Chautauquas, began back in the 1870s initially as a means to educate Sunday school teachers and then as religious revivals. Tents set up just a little ways outside of towns with easy transportation available via train were meeting spots for week long gatherings. Although they started with a religious bent, they quickly changed into a means of exposing the public to entertainers and new ideas. It was a forum for gathering and dispersing information, for friendly discussion of political views, and for enjoying vaudeville type entertainment. Chautauquas reached their pinnacle in the 1920s and then slowly disappeared with the advent of the radio. History does repeat itself as each new technological advance seems to be mirrored by the loss of something else.

There are still a few Chautauqua’s around the country but none so dear, at least to me, as Big Top Chautauqua located between Washburn and Bayfield on the Bayfield Peninsula. There is certainly no grander site then the viewing of the large blue striped tent nestled at the base of Mt Ashwabay on a clear blue day. The Big Top is now in its 24th season, having started just this past weekend with the raising of the tent and going until it comes down again on September 12th. Between now and then, there will be 56 shows encompassing everything from nationally known performers and historical musical theater to the annual Pie and Politics forum. Tens of thousands of patrons will cross into the tent under blue skies and then emerge under skies filled with a thousand stars. 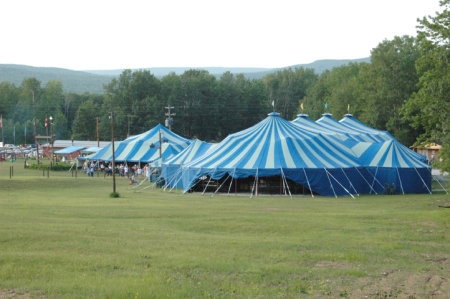 Lake Superior’s Big Top Chautauqua is a non-profit organization started by a few local community members who were willing to dream big and then put in the effort to see the dream come true. It is now sustained by a small army of volunteers who work all aspects of the organization from raising money year round to physically manning the facility during the summer. I do believe this may be my 10thyear as a volunteer. I have always found it much more fun to be intimately involved with a program then to slip in, see a show, and then slip out. Okay, there are times when I enjoy going the more mainstream route. Buy a ticket on line or purchase one at the little ticket booth the day of the performance, arrive with enough time to get a drink and something to eat, casually take my seat, enjoy the evening of entertainment and casually slip back out. But, my greatest memories are from the shows I have staffed. I have worked everything from ticket salesperson to stagehand. I have been a local roadie for Willie Nelson and Randy Sabien. I have provided security for Earl Scruggs, sitting on the front of the stage to assure no one attempted to rush on. That’s kind humorous since I’m only 5’6” and not very stout. And I’ve worked backstage security for numerous performers. That’s my favorite spot. Arriving early, talking to the performers, watching parts of the show from the wings, and answering endless questions about whether or not the performer will sign autographs afterwards, it’s what I live for. There are volunteers who come to the area for a week and work every show that occurs and volunteers who make it up just once a season.  They all have the same love for the tent and sense of ownership in the magic that is made.

Getting involved in the local arts scene as a volunteer, whether it is at Big Top Chautauqua, the Park Theater in Hayward, Lucius Woods in Solon Springs, or the local performing arts venue in any neck of the Wisconsin woods, not only rewards the volunteer with an evening of entertainment but assures that these organizations can continue to exist. George Burns once said, “When you stop giving and offering something to the rest of the world, it’s time to turn out the lights.” Perhaps this is the summer to make sure that all the lights remain on.